Does black Friday give consumers a real bargain?

When Black Friday began to be embraced by marketers in 2013, initial efforts focused on instore, one-day only events. Since then, there are far fewer reports of hordes of shoppers breaking down doors and a greater effort to create multi-day, omnichannel campaigns.

This year was predicted to have a strong showing. The CBI reported that sales volume is expected to increase and the Centre for Retail Research expected UK shoppers to increase their spend by 3.4% compared to last year, up to £2.53bn. Initial data shows that those expectations are being met: at its busiest, Barclaycard reported seeing 1,184 transactions per second during Black Friday itself.

As part of our work at Gekko, we monitor how retailers approach and execute promotions like this to better understand and advise on the market. Ahead of Black Friday 2019 we saw that far from being a single day event almost everyone started their campaigns at the start of the week, and peaked with a push over the Black Friday weekend with limited additional discounts and promotions.

We closely monitored the Black Friday pricing strategies across eight different retailers in the UK and Ireland, recording the items and prices offered over the week before Black Friday. Across those retailers, we saw a big launch at the start of the week, an increasing number of items being put on offer as the week progressed, then a drop in availability as particular deals went out of stock. 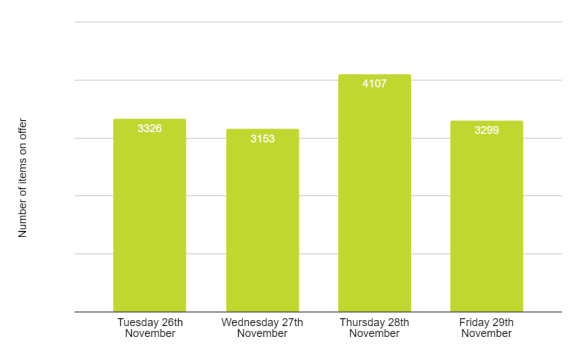 Discounting on the day itself didn’t prove to be particularly significant. Of the 2909 items we tracked that were available to purchase on Tuesday 26th and still available at the end of the week, just 321 – 11% – were cheaper on Black Friday. 10% were cheaper than on the Wednesday, and just 6% were cheaper than on the night before. In the main, shoppers looking for a bargain could have purchased at any time during the week and would have been unlikely to see their purchases cheaper later on regardless of the store.

Of those 321 tracked discounts, TVs, laptops, and mobile phones made up almost half of the additional discounting, with scattered flash pricing on hot items like AirPods making up much of the rest.

Product categories of items cheaper on Black Friday than earlier in the week, 2019

But don’t be fooled by the data here. Although 23% of the extra discounts were on TVs, only 16% of all TVs we tracked were cheapest on Black Friday itself. For everything else, the Black Friday price was the same price as the rest of the week. And though we saw some variation on prices for specific items from retailer to retailer throughout the week, Black Friday is so sensitive that prices were very similar if not identical as retailers ramped up their price matching.

Although we expect data released and compiled over the next week to show that online took a bigger proportion of the Black Friday and Cyber Monday spend this year, a battle on price isn’t the only option open to brands and retailers. This year we saw an increased push of AR product viewing by both Amazon and Currys PC World, and our online analysis showed brands partnering with retailers so that consumers could talk to a brand ambassador remotely. This is an attempt to mimic the experiential marketing that we have seen work so well in-store, and it’ll be fascinating to see how this develops in future.