A sporting chance for 4K

It’s springtime and many of us are looking to update and upgrade our homes, not only in the kitchen and garden, but also in the living room and the entertainment we choose for our viewing pleasure.

Sales of 4K TVs are on the increase, with GfK recording 100,000 4K TVs sales in November and December 2014. Sales in the UK are predicted to reach one million by the end of 2015, accounting for 10 to 15 per cent of the total TV market volume. With sales predicted to reach between two and 2.5 million units in three years’ time, are retailers ready?

In September/October, we have the rugby world cup being broadcast by ITV, which is rumoured to be in 4K, as indicated by pay-TV broadcasters, with BT Sport’s director of TV Alex Green admitting that the broadcaster was working “very hard” to secure 4K transmissions of its Premier League matches for the 2015/16 season. The average price of a 4K TV at the end of 2014 was just over £1,000, and the average screen size was 50in. This is clearly a considered purchase and so store staff need to have the knowledge and understanding of not only the technology, but also the sales techniques to succeed in closing those valuable sales.

Last summer, Gekko’s connected home research uncovered that a smart TV was the third most popular choice of smart product, with 36 per cent of shoppers interested in purchasing one.

Understanding the importance of the omni-channel proposition in driving sales on the shopfloor is critical. Starting online and ending on your shopfloor, the customer experience is an ever more important aspect of the sales journey for you and your brands.

In the past year, retailers have benefited from two large sporting events, the Fifa World Cup and the Super Bowl in the US, uplifting sales of 4K TVs. More than half (59 per cent) of the 4K market value in April 2014 came from 50in to 60in models, and in May 2014 UHD made up just over eight per cent of market value, assisted by the average price of a UHD TV falling 15 per cent, with GfK stating that this was due to the World Cup effect. With seven out of 10 rugby fans in the UK watching international rugby on TV (Source RadiumOne – Rugby fans and technology) 89 per cent of those will watch at home. Could this sporting event see another boost in 4K sales? I expect so.

But it’s not just about sport. More original 4K content is becoming available via Netflix, Amazon, as well as remastered 4K content. Despite being very quiet since their formation, the UHD Alliance sent out a press release on  April 7 calling for contributing members to define the next-generation entertainment experience.

They want more companies to get involved in the alliance. We may be at the frontier of the 4K revolution, but with broadcasters, streaming services and not only film studios but also gaming studios creating in 4K formats, the future of 4K is promising.

But, will we have the homes big enough to  accommodate that optimum viewing experience in 4K? I suspect, driven by studios and broadcasters to inject rapid growth, manufacturers will produce smaller variants of their 4K TVs to drive popularity of the 4K format as the next industry standard. Shipments as a share of the total LED market for 4K are up year-on-year from 5.1 per cent to 14.2 per cent according to data from WitsView, which clearly demonstrates an appetite for growth. Unfortunately, no there’s such story for curved.

The average time spent per day by UK adults using technology increased from 7h:38m in 2011 across all platforms to 9h:34m in 2015, driven primarily by the increase of tablet, PC and smartphone viewing (recorded by eMarketeer).

TV viewing only fell marginally in the same period (3h:19m to 3h:12m), demonstrating that the TV remains the hub of the of the home for our viewing entertainment and shows no sign of dropping off with such appetite for growth in smart TVs, catch-up facilities from Freeview and streaming devices like Chromecast.

It’s a category that drives technological innovation and growth.

Gekko are delighted to reveal our new brand identity and website, that gives a fresh look to the UK’s number one tech-focused Field Marketing agency.

Daniel Todaro, MD, Gekko said “Complementing the recent brand refresh, Gekko continue creating rewarding connections with our new website. Over the past 13 years, Gekko has maintained its ability to adapt in retail, the most dynamic of industries, to bring your brand to the right people and the right people to your brand. Gekko Field Marketing helps complete your customer journey and brand experience with measurable ROI and insight complementing your brand’s ATL.”

The General Election and ‘brand politics’ 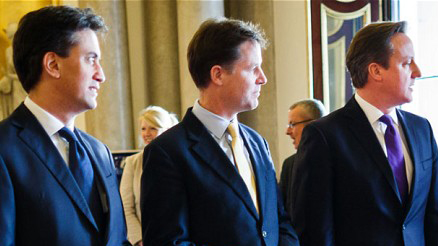 It’s General Election time in the UK, and we go again to the polls on 7 May with a more fractured group of parties to choose from than ever before, and voter apathy at its highest.

A while back I tweeted that in order for Labour and more specifically Ed Miliband to win, he needs to be ‘on brand’. This caused much derision as many followers said brand had ‘nothing to do with politics’.

No, it shouldn’t, but in amongst the policies, brand is now a major consideration when aiming to reduce voter apathy and appeal to first-time voters.

Needless to say, as we hit the home straight, brand and leader appeal is now a serious factor. Who wants to vote for policies associated with a leader such as David Cameron who can’t decide which football team he supports, and in the process proving himself as not necessarily the most reliable or authentic brand.

Ed Miliband should never try and high five a child on camera for fear that it may backfire as it did making his brand a little bit uncool, but ahead on trust.

Over the past five years in office, Nick Clegg has never regained the trust of others in his brand and is now overshadowed by the new emerging brands of Plaid Cymru and the Scottish National Party, who have as most new brands which speak differently do, established positive brand credentials amongst voters old and new.

Today’s society, whether we like it or not, is driven by brand appeal from the clothes, technology, food and beverages we choose and whoever endorses them. Yes, I and many others would like to see politics come back to policy irrespective of personality, but as society changes, perceptions are influenced and social media can sway your personal brand appeal in minutes, not hours.

When will politicians grasp that we want to vote for leaders who we trust and inspire all to make us want to realise our potential and the potential of our society to achieve, rather than false gods who will say and do anything to gain our vote and fail?

With no overall majority in sight, the UK is desperately looking for that inspirational leader and they must come along soon to change the outcome of British politics in 2020. In the interim, we will more than likely have to make do for the coming five years with one of the current mediocre potential leaders in office whose brand never quite achieved the equity needed amongst voters to secure an overall majority and represent the nation as one voice.

Make the most of the Shopper Journey this Spring

With spring cleaning on shoppers’ minds, a fresh wave of potential customers will be coming into store hunting for the best appliances to spruce up their homes and meet their IoT [Internet of Things] needs.

This poses an opportunity for increased sales, so it’s time for retailers to match consumer enthusiasm by entering new categories and stocking this wave of innovative products.

Floorcare and handheld cleaning appliance brands, such as Kärcher and Electrolux, will be taking advantage of this increased consumer demand by releasing above-the-line campaigns and promotions for the spring. Retailers should take advantage of these campaigns as they can drive footfall into store.

Retailers need to complete the customer experience. Make sure your store is properly  merchandised to draw attention to these hero products. Guide consumers on a shopper journey and convert them into shoppers.

With the economy picking up, consumers are willing to spend that little bit extra to get the best products that will improve their lifestyles, with reduced power consumption and ease of use.
Recent research by Gekko shows that there has been a seven per cent drop in consumer cost-consciousness over the past year. With this in mind, retailers should look to enter new categories and begin stocking innovative products.

We can see from the rise in popularity of such products that consumers are willing to pay for the added benefits brought by innovation. Cordless ‘handstick’ vacuums are an excellent example. With space at a premium, handsticks have rocketed in popularity since entering the market in 2013, as people are doing away with conventional vacuum cleaners. The sector is now worth £64 million. With the average handstick costing around £200, consumers are clearly interested in purchasing premium, innovative products, as long as the lifestyle benefits are clear.

The rise of smart appliances will also make a big impact this year, as more consumers become aware and understand that the IoT is no longer a concept, it’s real. With many shoppers looking to replace their outdated appliances as part of the spring spruce-up, electrical retailers should capitalise on the current smart-home trend to increase sales of premium appliances.

Smart appliances, such as the Samsung WaterWall range of dishwashers and Grundig’s MultiSense washing machine, are good examples, incorporating smart technology into everyday appliances. Why not try a new category like the smart home, with products such as the Hive smart thermostat?

What’s important for retailers is to have trained staff that can properly explain these benefits.